To execute and manage the technical, administrative, and scientific aspects of REACH, the European Chemicals Agency (ECHA) was created.

REACH requires that chemical manufacturers and importers with volumes greater than one ton per year provide information on the physiochemical properties and environmental and health impacts of their chemicals, so that they are used in a safe manner.

The CLP Regulation seeks to apply within the European Union the criteria agreed internationally in the Globally Harmonized System of Classification and Labeling of Chemicals (CLP/GHS). It took effect on January 20, 2009, and was implemented progressively, beginning first with chemical substances and later mixtures, coexisting with the regulations to be repealed until its full implementation. This means that the regulations are constantly changing.

The purpose is to harmonize criteria for classification of mixtures and substances and regulations on labeling and packaging.

The CLP Regulation establishes that providers are responsible for labeling substances and mixtures sold.

The labels include the following contents: 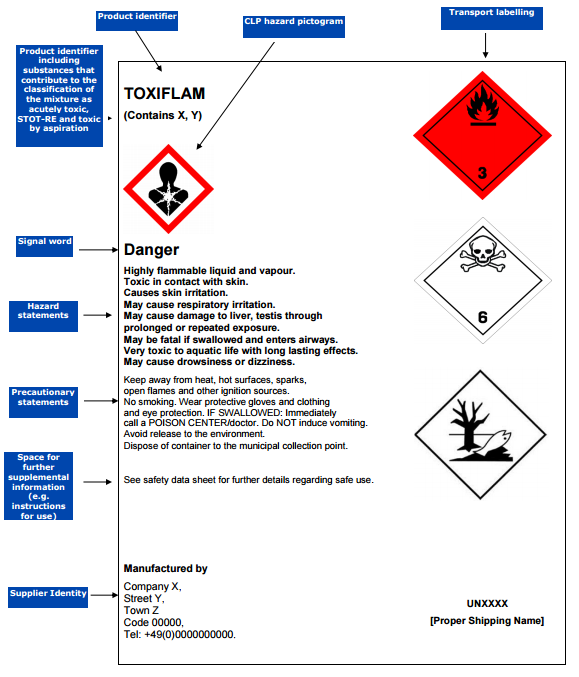 Bottom of the image: Source

1.- The name, address, and telephone number of the provider.

4.- Hazard pictograms corresponding to this regulation.

Bottom of the image: Source

5.- Signal words: Based on the classification of the mixture or substance. The signal words are:

“Wherever the word 'Danger' appears, the signal word 'Warning' will not appear”.

**There will appear no more than 6 precautionary statements unless more are needed to reflect the nature and severity of the hazards.

According to the CLP Regulation, the following rules must be followed:

1.- The hazard pictogram must be perfectly identifiable and all elements will be clearly marked.

2.- The label must be placed horizontally in the position at which it is normally located on the package.

3.- Its dimensions must be as follows:

**The label will not be necessary when all its elements are clearly shown on the package itself.

4.- The signal words, pictograms, hazard statements, and precautionary statements must be together on the label.

5.- Each hazard pictogram must cover at least one fifth of the surface area of the label, and the minimum surface area will be no less than 1cm2.

Do you have any questions about how to label chemicals?

How to save costs in the process of labeling, coding and marking products with UBS

How to reduce production costs with product identification and tracking? Being able to adapt the purchasing process and the production process to changes in demand is essential to maintain com